NutMegandCinnamong said:
Fillers can make a face look bloated. That alongside a filter is what is making her skin look eerily smooth. Likewise, poorly inserted silicone nose bridge can make the bridge look deviated.
Click to expand...

The key here is control. MM likes to control how she looks in the cher wig, 'bump' in place, plumped up with fillers, and smoothed out with filters. İ really can't imagine her being out and about amongst real people on a walkabout like TQ, William and Catherine. She is far too shallow and vain and image-conscious. They are both mentally ill functioning people, by which İ mean they are not sectionable at the moment. But she is very dangerous because İ don't think she will ever stop complaining about TRF, or do the right thing by her family, especially Thomas. She has money, infamy, a court case under her belt, a child and a 'pregnancy', association with TRF without the work. Only someone with severe mental problems would continue in this way while spouting that she is philanthropic blah blah blah. She would never appear in an unscripted Orca talk with an audience. Her interview will be heavily edited with answers to all the questions thrashed out well beforehand......

I can’t keep up with the threads since like thread number 1 lol, but as MM is back in the news recently I still stand by my impression that she seems to be acting all the time - I just don’t get genuine warmth from her. Harry is also disappointing tbh.

Bloody hell. Nothing can beat this!

emmer_moans said:
I can’t keep up with the threads since like thread number 1 lol, but as MM is back in the news recently I still stand by my impression that she seems to be acting all the time - I just don’t get genuine warmth from her. Harry is also disappointing tbh.
Click to expand...

Omg I agree 100%. It’s all an act, all the time! I mean that OTT calligraphy letter to her Father is just one example of how she’s never ‘off stage’ or out of character.
R

I think I need to take a break from these two. It is too much.
N

WhatwouldPrinnyDo said:
So much hair. Just so so many extensions.
Click to expand...

Nannyto2 said:
She nicked that hair of her madam Tussaud’s wax work
And the nose
Click to expand...

Am I the only one who finds this scary? Harry's head isn't on right and I don't know who that woman was modelled on, because it doesn't look like Meghan!

ResidentMerkin said:
I think I need to take a break from these two. It is too much.
Click to expand...

Oh no don't do that! I love your posts, they're always really witty

Pixillated said:
I used to see Meghan as very attractive.
I know that is not a popular opinion.
The thing that is most surprising to me is that in the last few months if I were just scrolling through a newspaper reading articles and I scrolled by a picture of Meghan, I would not recognize her. It is just so weird to me.
That is the weird part, she no longer looks like herself, at least to me. And when I look at her now, I see reminisces of other actresses. Just like a brief whiff of someone else. And then it disappears, but, still not Meghan.
Click to expand...

I thought she was stunning and I liked her casual style. But since becoming a royal she's had to dress a bit more stuffily and has made some bad outfit choices.
I thought her face changed and put it down to fullness from pregnancy/birth and aging and good for her not trying to be a skinny minnie but then it also looks like some fillers and not done well. Same with the hair, gorgeous before marriage and since leaving those kartrashian style lengthy waves

ResidentMerkin said:
I think I need to take a break from these two. It is too much.
Click to expand...

I feel the same. It’s taking up too much space in my head lol. I need a Harry Potteresque pensieve to remove them from my brain

Apols if already posted. HMQ will show how it's done!

OMG! just been back to have another look! Shitting Nora! it’s nearly down to her fecking knees!

bubbadabut said:
Re The Princes Trust thing, is this just a fudge to keep Harry receiving money from Daddy?
Click to expand...

This idea of expanding to the US pisses me off to no end. Why? Is it to give Harry something to do at the end of the day? If I were to get a hold of Prince Charles I would shake him and slap him Cher-style and tell him to snap out of it. He is an adult, let him fail on his own. If this is just a way to build a bridge of some sort to the States, might I remind you sir that they dumped your arses a long time ago and AND they were always Johnny come latelys regarding the wars. THEY DON'T CARE ABOUT YOU! Why do British elites think that the States gives a rat's arse about them? Why do they keep selling Britain down the river to them?

To take a page from Lennon's book, when McCartney was busy doing side projects, you can only spread your RF caviar so far until it turns into tuna.

Stop it! I am choking here! Hilarious! 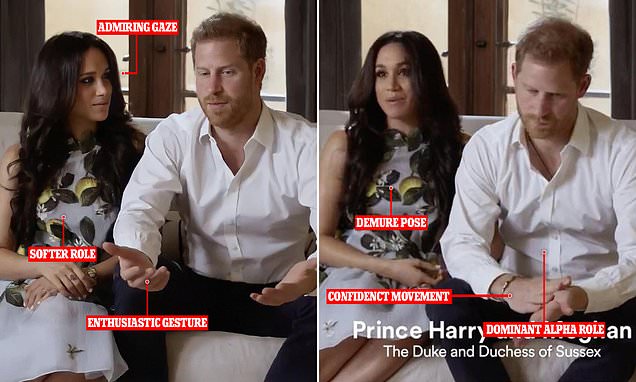 In a clip released yesterday to promote their Spotify podcast, the Duke of Sussex, 36, took a 'more dominant role' while his wife Meghan Markle, 39, appeared 'demure', Judi James told FEMAIL

www.dailymail.co.uk
She's certainly not seeing what we are seeing!

Glad some others are questioning the bump (or lack of it) too!
B

The Spotify clip was pre-recorded a few weeks ago (having seen the odd comment from other celebs involved) before they announced the 'pregnancy' so Megz was trapped. She couldn't look 5 months pregnant in case the pictures leaked, so she went with 'slightly baggy dress' and wing it. No wonder she looks nervous in the clip. When we see the Oprah video, a miracle bump will appear.

There's a political broadcaster, Iain Dale, who is very close to the Government and MPs like Rory Stewart, William and Harry's old tutor. He doesn't 'do' Royal stuff normally but on his last podcast this week said he'd heard from well connected people that Harry is completely lost at the moment and (reading between the lines) there's a lot of worry about him.
V

So The Prince’s Trust thing - it’s probably the best thing Charles has ever done, it should be carried forward by the next Prince of Wales (hint) - if Wales continues to have one which they might not want - and he should consider it his legacy as his reign as King will not be that long in history. So why on earth he would let Harry anywhere near it is very questionable because he will ruin it. In the US it appears to have a professional CEO and will hopefully do some good under the radar but it’s misguided going to America. It should have gone to Canada or Australia first where there is still a link to the Royal family - same Queen n all. Prince’s trust is a royal connection so the Markles should be kept well clear, but then Charles is very weak.