miss.priss said:
I wonder who takes her photos. Is it that guy that hangs around her like a wart?? Imagine videoing someone on their phone.. weird AF
Click to expand...

It will be a wannabe guy that follows her around as she may have promised to let them be in a freak show coming soon... The first seasons she desperately shows that
1. she is popular
2.everyone wants to be
3 . She is the boss In there marriage and does not need amir ( she claims he can not manage without her).
4. All she did was talk about the past, showing materialistic stuff and is disgusting if talking or touching the kids.
I wonder how both "parents" are treating there kids, would all the kids look after faryal and amir in old age or put then in a old folks home. It is a shame that both of them have no love for themselves and flirt with any living soul that gives them time.
J

Did anyone see the recent snap of one of her cousins? One looked perfectly normal and pretty and the other a complete mash up of plastic surgery just like faryal

those lips are going to haunt me!

Sami256 said:
Did anyone see the recent snap of one of her cousins? One looked perfectly normal and pretty and the other a complete mash up of plastic surgery just like faryal

those lips are going to haunt me!
Click to expand...

I have just seen blow up lips, looks painful to watch. Faryal loves to show off other people kids but refuses to show or knowledge her kids.
The pic that faryal commented the second mum, is that really her as I little girl. I bet her childhood was passed to other family members.

That girl with the big lips is genuinely so scary looking

Laserhead said:
That girl with the big lips is genuinely so scary looking

Why was she acting like she was trying to give a bj to the camera.

Dee1hereforsomeT said:
Why was she acting like she was trying to give a bj to the camera.
Click to expand...

Maybe looking for someone special like faryal does for attention.

Why upload the middle child photo like u miss her.
Did faryal not piss off to Pakistan when the little baby was born. Faryal is 1000% a dead Beat mum that would bring all 3 kids together like a real normal family but amir has no balls to stand up to his wife or mother in law.

So she left her kids again just so she could film herself going back to the UK to spend Christmas there with fake friends and family members she never sees anyway but couldn't spend it with her own kids or take them with her. It's truly bizarre! Isn't that the whole point of Christmas?

That woman gave me the shudders and as for the rest, none of them looked like the type to have Christmas get togethers, just desperate to get on tv for a few mins for her shitty show! This time someone called mannaza was her bestie.

Faryal is as fake as her fake tits. If Amir loses against Kell Brook, that's the only thing that can bring him and his 'manager' back to reality.
S

This good for nothing tart has children scattered around all over the world. Mrs business tycoon here is too busy making money and doesn’t have time for her children

She’s needs to be reported to social services for neglecting her children!!! This tart has achieved fuck all her whole life. Her miserable, inner blackness is shown on her face!!!! Shitty daughter, mother, daughter in law, wife, human being award goes to her. From top to bottom she is fake, carry on trying to show you have “family” when you dump your own and turned your own family into your slave

Leaving your kids in another country with your family is one thing but she’s literally leaving them with strangers. They could be taking pictures of them and all sorts to make money those nannies, you can never trust anyone
Absolutely disgusting behaviour!

Faryal with her part time pal,

Does she really think the public is brain dead and doesn’t realize she is using this rent-a-friend for a storyline?? Btw that fish lipped lady posted a few comments above is Faryal’s random cousin Sania https://instagram.com/saniyabshafi?utm_medium=copy_link
..or rent-a-cousin I should say.

i took a look at this jinn’s tagged photos and saw this as one of the top results:the poor child looks like he’s trying to communicate “please get me away from this witch!!”

Amir does not spend time with his son so why spend with a stranger's child and poor children scared and upset of his ugly face, 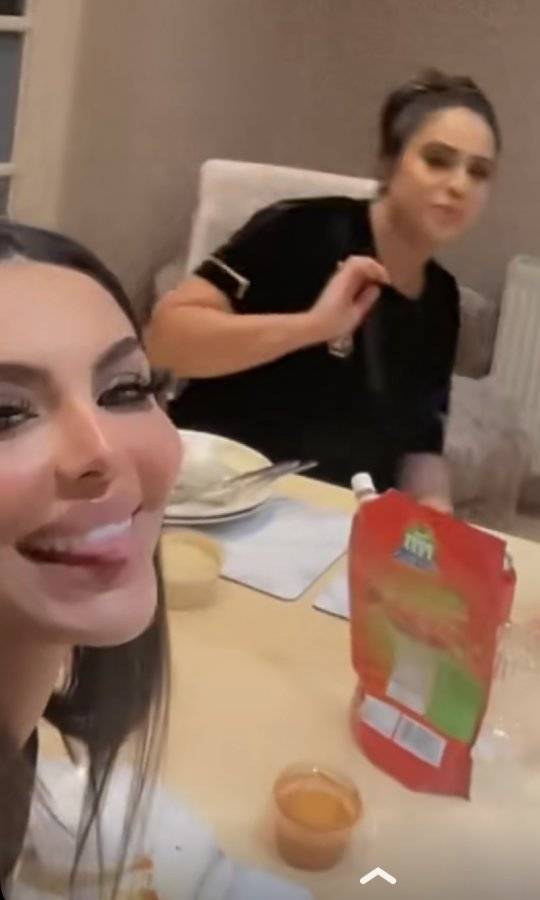 Plastic doll with her "I have females" friend
N

New tv show to fake their lifestyle. In the first he borrowed all his friends nice cars and passed them off as his when all he has is a merc which is supposedly faryals. He sold his Range Rover a while ago but for the show he rented all this high end cars such a joke how they put on this whole fake lifestyle
S

Don't even bother giving this piece of trash any attention over her dressing. I bet she can't wait to read the comments on here. Ppl like her and Amir are so far gone with arrogance. I hope Kell brook knocks Khan out and that will put these two arrogant fuckers in their place.

I'm not going to take the name of the person here because Amir would know who he is. But that guy was telling how he's been with Amir in Leeds while Amir had a prostitute from Leeds in the car. Since Amir mentioned himself when asked on a tv show that he abstains from sex 6 weeks before a fight, Faryal is not worried he will be fucking anyone while she gets her plastic tits out with his friends.
J