They are all in legal action. It's quite interesting but there is so much it's been difficult to follow it all.

Titanic and Mars were doing weird videos / music together. Then broke up.

Titanic then gets together with Poppy and starts doing the same thing in a same style with Poppy pretty similar to Mars. 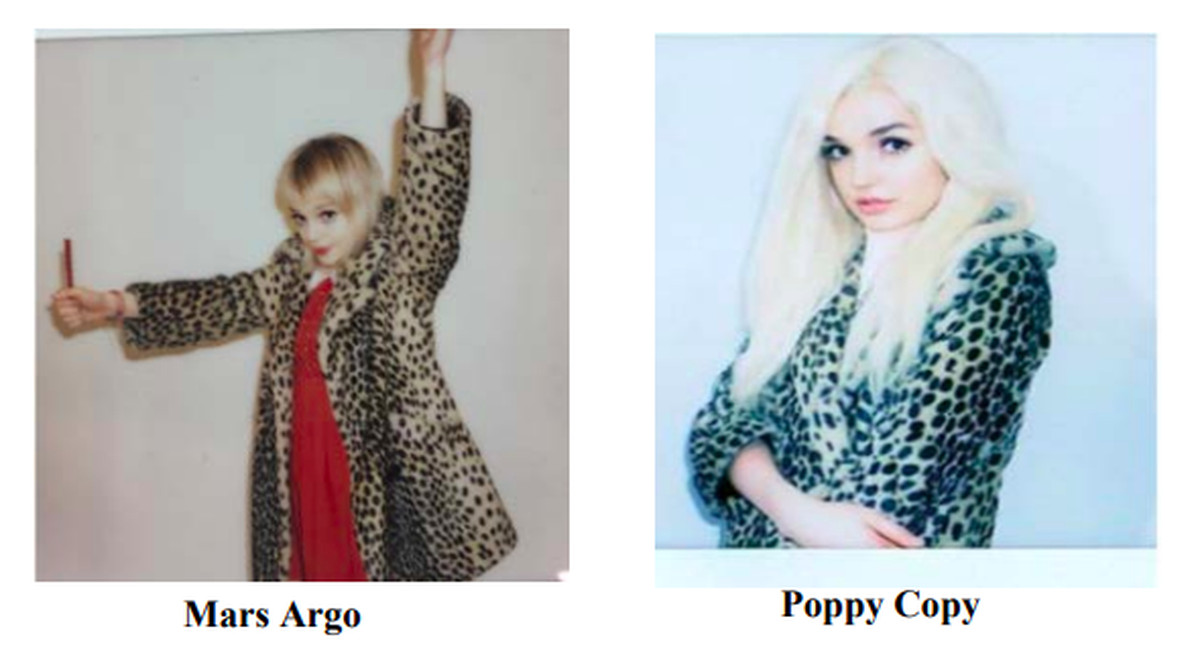 This goes on for a few years, then Mars filles a law suit against poppy and titanic:

Image: Sundance Institute
YouTuber Mars Argo is suing musician and internet persona Poppy and her creator, Titanic Sinclair, otherwise known as Corey Mixter. In court documents obtained byThe Verge, Mars Argo, real name Brittany Sheets, alleges that in addition to enduring “severe emotional and psychological abuse and manipulation from Mr. Mixter,” he also crafted a “Mars Argo knockoff” in the form of Poppy. Sheets is also seeking a domestic violence restraining order against Mixter, as well as damages against Poppy actress Moriah Pereira “for being a knowing accomplice to Mr. Mixter’s unlawful actions.”
The first Poppy video, “Poppy Eats Cotton Candy,” was released in November 2014, the same year Sheets and Mixter split. Poppy has since amassed a huge following online for her mysterious persona and strange videos. The pilot for YouTube Red’s I’m Poppy premiered at Sundanceearlier this year, while Poppy herself has inspired a wide range of conspiracy theories and fawning profilesdedicated to her mystique.

Through photos, text screenshots, and more, the lawsuit alleges that Sheets endured abuse both during and after their relationship. After they broke up in January 2014, Mixter “began to repeatedly harass, stalk, threaten, and abuse Ms. Sheets, including — but not limited to — threatened to commit suicide, repeatedly showing up unannounced at Ms. Sheets’ doorstep, breaking into her apartment, stalking her every move on social media, disparaging her to mutual friends, acquaintances, or others in the industry, and even physically assaulting her.”
A comparison submitted in the lawsuit.
In addition to noting similarities between the format and appearance of Mars Argo and Poppy videos, the suit also says Mixter “copied Mars Argo’s identity, likeness, expression of ideas, sound, style,” and more; as part of her role as Poppy, Pereira “dyed her hair a specific platinum blonde and, in character as Poppy, started to alter her voice to be a pitch higher to mimic Mars Argo’s distinctive speaking voice.” Publicly, Mixter has claimed to have “invented” Mars Argo; the document also alleges that he’s called Sheets “a complete nutcase,” “evil,” and “a compulsive liar,” among other derogatory comments.

The day the lawsuit was filed, Sheets released a lengthy statement on her Twitter. “I hope that coming forward about this will make me feel better, feel safe, and feel like I’m able to be myself again,” she concluded.
Click to expand...

I've lost interest with Poppy as the music peaked years ago with low life, but following this case to see what happens.

I've followed this a bit and its really sad. I think there was also something about him stalking his ex and being violent at one point? I wonder if Poppy is being abused/manipulated too.