Who is the leading businessman with the injunction?

I bet its Philip Green..
P

Found that some are saying Richard Branson, from this article

18 OCTOBER 2017 • 10:23AM
Follow
At the Australian Grand Prix of 2009, me, my girlfriend Jessica, my manager Richard Goddard, Dad and a few others decided to get a bite to eat at Nobu. I can’t remember how far we’d got through the meal when we became aware of a kerfuffle. His Royal Highness Sir Richard Branson was arriving. And he was very, very drunk.
Earlier in the day, and with a bevy of flag-bearing dolly birds in his wake, Sir Richard had marched up and down the paddock, waving, grinning and giving the thumbs up to his adoring public, who were, in fact, wondering what he was doing there in the first place.
The reason, of course, was that he - and Virgin - had a couple of stickers on our car.
I can’t say he’d won a lot of admirers with that stunt, but at the end of the day he’s national treasure Sir Richard Branson, famous publicity seeker, so you cut him some slack. It’d be like hating a dog for barking at the telly. It’s just what they do.
What he did in the restaurant was less excusable. However, before I go on, it’s only right and proper for me to point out that he apologised for what happened that night, and even said that he gave up drinking for months afterwards.

He lurched over to our table and plonked himself down and started behaving like a party-starter. I had to make a toilet visit so I didn’t see what happened next, which was that he leaned over to Jessica and told her, “Stop staring at me.”

She pointed out that she wasn’t staring at him. “Stop staring at me,” he insisted. Although Jessica was a model she was quite shy, so this was making her feel uncomfortable. Especially when Sir Richard followed up his blatant flirting by putting his hand on her face.
“Look, I think you better leave,” warned my manager Richard, “or you’re going to get chinned when Jenson gets back.”

Branson chats to Button in 2009 CREDIT: AP
Actually, I’m not in the habit of punching knights of the realm in Nobu, so there was never any real danger of that happening – certainly not the night before a race – but even so I was furious to return and find His Excellency with his hand on my girlfriend’s face.
“Hold on,” I said, “that’s enough. That’s well out of order.” But he was so hammered that he simply didn’t understand what the problem was. The next thing we knew he’d stood up from our table and tottered over to a party of 10, where one of the diners, presumably unaware of quite how drunk he was, handed him a baby, hoping to get a picture of him holding it.
Sir Richard not only proceeded to pick up the baby, but stagger around the restaurant with it, gradually getting more and more careless, until at last he returned the child and left.

At our table we were looking at each other incredulously. “I can’t believe this,” said Richard. “We’ve got to work with that k--- for the rest of the year.”
Last edited: Oct 25, 2018
P

Edit, I don't really get it if there are so many articles about Branson that aren't blocked, so not really sure if it is him 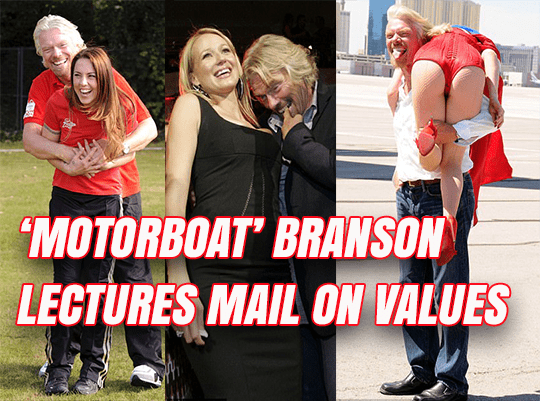 Virgin Group head Richard Branson has offered a soft-focus denial of allegations that he sexually harassed a backup singer for English singer-songwriter Joss Stone. In statements published by The Telegraph, Branson said he had “no recollection of the incident” described by singer Antonia Jenae.


The allegations are suddenly in the headlines, but were initially aired in an October 16th Facebook post by Jenae. Jenae describes Branson “trying to convince me to show him my boobs” at an island party. Then, Jenae claimed, Branson “proceeded to ‘motorboard’ my breasts with his face” as the party was breaking up.


According to the Telegraph, the island referenced by Jenae is Necker Island, a Caribbean which Branson owns. The alleged incident would have taken place in June 2010, after Stone and her band played a nearby festival.


Jenae has since told The Sun that “his behaviour was disgusting. I feel like it was sexual assault . . . Everyone was wondering why I wasn’t angry because I’m usually a firebrand. But I was just too shocked.”


A Virgin Management spokeswoman also stated, according to the Telegraph, that “everyone appeared to enjoy their time on the island. Richard has no recollection of this matter and neither do his family and friends, who were with him on the island at the time . . . there would never have been any intention to offend or make anyone feel uncomfortable in any way and Richard apologizes if anyone felt that way during their time on the island.”


Joss Stone’s father, Richard Stoker, also contributed to the Virgin statement to the Telegraph, saying that “Joss and the group had a wonderful afternoon on Necker Island, everybody entered into the party spirit and it was wonderful getting to know Richard and his family.”


There are elements of the statements that were once standard in such situations, but which the latest round of harassment allegations seems to have rendered insufficient. Senator Al Franken was roundly lambasted earlier this month for saying “I certainly don’t remember” what broadcaster Leeann Tweeden described as a coerced kiss, and for dismissing a picture of him pretending to grab her breasts as “clearly intended to be funny.”


Franken quickly amended his statement to something more genuinely contrite, and Branson may find himself having to do the same. In addition to the weakness of the ‘I don’t remember’ defense, Stoker’s claim that “everybody entered into the party spirit” seems to subtly imply that Branson’s forgotten behavior might have been acceptable under the circumstances, a sentiment unlikely to be received well in the post-Weinstein era.
Last edited: Oct 25, 2018

I wouldn't be surprised if it was Richard Branson he's flew to Jeffrey Epstein's pweirdo island enough times.
M

I think it's Branson, he's known for being very sleazy and is a vocal remainer so the telegraph would go after him. Not alan sugar he's tweeted to say it isn't him.
N

It's Branson, some US bloggers have said so. If you are outside of the UK you are free to talk about it so a non UK paper will put him on the cover soon!

This blog is no great fan of injunctions. They only operate within UK boundaries. So it is with a frisson of pleasure, indeed as Vince Cable would say with an exotic spasm that I announce that ABC is Virgin Media chief Richard Branson.
Y

Loved that Bannatyne bet someone £20mil v £2000 of their own when they tried to accuse it being him on Twitter. Good on him.
Y

Been named In Parliament as Philip Green
P

Srh1984 said:
Been named In Parliament as Philip Green
Click to expand...

Just came back to say it! Good glad someone named that vile man.
K

In all honesty I believe a majority of these wealthy big business men are alike.

I've worked for a couple and the ego's.. ugh you don't want to know. They think they are untouchable.

It's the same in any business place though, however small. Whoever gets to call the shots and is the boss can be ruthless in many ways.

I'm loving these are the times that these things are coming out into the open It's been hidden in the dark shadows for long enough. It turns out no, they are not untouchable.

So when is Phill Green being stripped off his Sir title?