Moderator
I'm just not a fan, he doesn't ever do much apart from just report the facts and the constant requests to comment down below as "I'd love to hear what you think" is disingenuous. It's just to trick the algorithm he never actually spends time chatting in the comments.

He has a sponsor every single video. Has promoted that better health app that pay him $100 per signup and has loads of negative reviews. Also has a patreon which just feels unnesisarry. Most of his videos get over a million views and have ads. I get there's probably one or two people behind the scenes working on stories, but it's not a great deal of effort that goes into collating Popular topics and repeating the information or requesting a comment.

Anyhow the thumbnails are good, so I often do watch for a minute if a story interests me ?

Moderator
Well keemstar has gone in on him!!!
Not a fan of either but I’d this is true about “better help”
And by the looks of it Philip took time of for “family reasons” yesterday ? suggesting something is going down...
The fall of DeFranco could be in sight

Moderator
Yes!! I find keem annoying, but glad he's done that. Really makes him look like he has more integrity than DeFranco.

Intriguing that it's DeFranco's company that all these YouTubers have gone through in order to promote this app. Hopefully this blows up in his face and people stop giving someone with such a successful buisness pateron money just to boost his profits. Reports are it's 140k a month just in patreon money!

Moderator
Katie has been promoting better health since 2013 when it was set up, shes released a book that seems to be copy of others and DeFranco is going to the better health offices (where none of the councillors actually ever go!) to stand up for the company

Totally agree with Keemstar on this, they knew it was dodgy if they were getting $200 for everyone that signed up. Finally, Defranco is being seen for the con he is.

Worth 20 million but yet sets up a patreon to get money to re launch his show after it made a fortune selling his last company. Why risk your own fortune if you can hoodwink people into paying for it?

Moderator
Yesterday's video was cancelled in place of a "let's talk about better health".

Uses a few very extreme comments to suggest everyone is unfairly questioning him. Then says hes cancelled all deals with better health now he's read their terms and conditions, maybe he should have read those before doing loads of videos for them? After all he goes on about how he needs the patreon money because of how many people work behind the scenes, surely with such a big expensive team someone could have read the t&c?

Uses the old chestnut of people have thanked him for being sponsored by better health, received so many emails apparently. His viewers loved the app and it was " well received "

" some pockets of the internet have bad reviews" like the appstores! No use just googling for review sites as they are so easily manipulated by flooding with good reviews, app stores are better at removing fake. Better business I believe takes a while to build up a review.

Cherry picks two complaints of the service, then uses people being rejected to praise the service for apparently screening people and being ethical. I expect if you tick the "suicidal thoughts" box they reject you to cover their own backs.

Goes on about his affiliate marketing company and he just just trying to create a win for all by connecting "amazing creators that were struggling to find sponsors" with better health.

Ends with him talking about how he wants to go to the office and speak to them.

There's the recap for his response. I'm still not impressed, he knew they were paying $200 per signup so knew it was very lucrative, didn't check the t&c until after at least 18 videos were made, then apparently was so unimpressed he cancled future deals. Lots of the videos were praying on people with mental health issues, selling a sub par product and beleive they all got swayed by an eye watering high commission. He didn't mention the $200.

Moderator
DeFranco is losing subs and patrons. Good. Admitting he's using their money to build up an ad agency to promote ethically dubious aps to people with mental health struggles is not what he was selling it as.

Hopefully keem will have a good video out, the baited podcast was great.

I know people hate Felix, but he was someone who did say last week he was offered it and didn't take it up as it felt explotative. Now he releases a video going in on better help and how flawed / suspect it is.

Funny old world where keem and pewdiepie are the ones showing ethics and morals.

If DeFranco got 5000 people to sign up for better health that's a million USD! He could have made millions on this app and his company setting it up for others to sell.

Moderator
This is very embarrassing, his live show for the high supporters on pateron where he presents a powerpoint on how much money he's making from building up a company with their money. The theme song is so funny

Haven’t liked Defranco since I saw what an obvious scam his patreon is. You can’t tell his supporters that though they genuinely think their money is going to good use.

BOABKP said:
Haven’t liked Defranco since I saw what an obvious scam his patreon is. You can’t tell his supporters that though they genuinely think their money is going to good use.
Click to expand...

At this rate though he will have not many left in year, although he's already milked 2+ million out of them to set up his empire.

Is disgusting, pateron was such a scam for this - should have been funding where people owned part of the company and shared the Revenue. 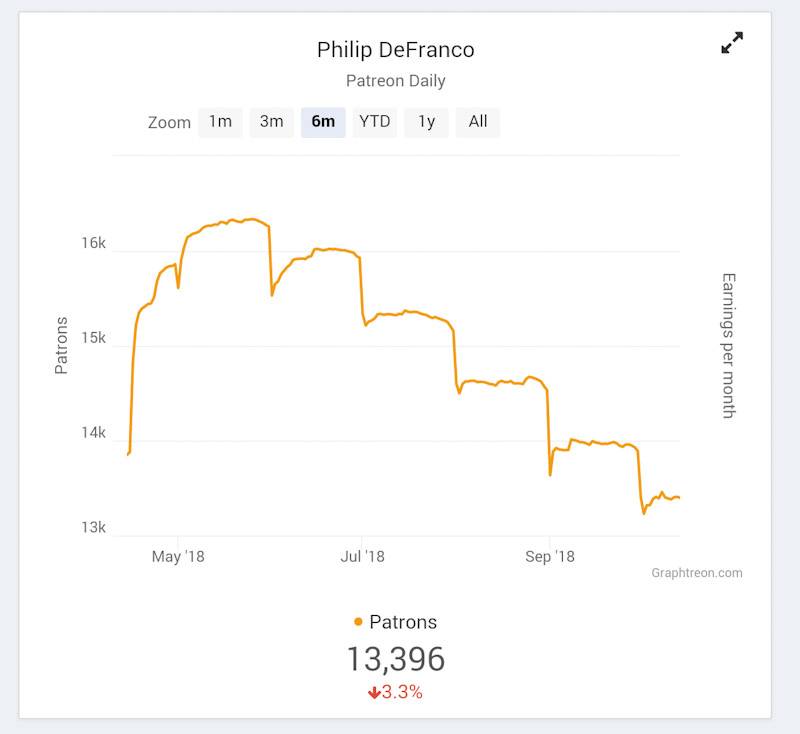 Moderator
PhilyD has issued his final statement on better health, but rather than actually saying it in a video he hides it away on twitter. This all stinks.