Told you last thread would be

For major updates they start at thread 7,
Please see wiki and previous threads for background info.
This thread leads into the aftermath of the exposure and the sad attempt of an apology

She is apologising for the Pakistani racist slant as that’s what lost her the brand deals. She couldn’t give a shit about the doxxing or the other racist stuff she had said. She needs to lose her blue tick and not have a platform. You learn the hard way, she had countless number of opportunities to apologize but only when shit got real did she bother. Reflection? 1 day

pull the other one.
L

so after fyzas pathetic apology which we know she didnt mean, all i can say is YESSSSS henna!!! we are all 100% here for you and support you, fyza is definitely panicking, i wonder what sonias like rn

imagine all this time we thought sonia was under fyzas rule, looks like its the other way around

This just speaks for itself.
Her apology is as fake as her face and body.
Also am I the only one who hasn’t seen her post anything about Palestine? 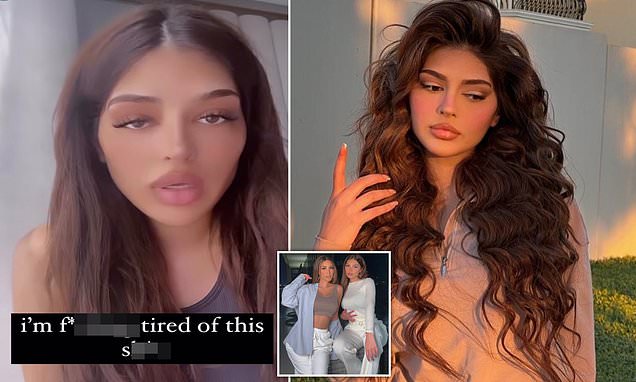 Kardashian doppelganger is called out for using racial slurs

Dubai-based British-Pakistani influencer Fyza Ali, 29, who looks just like Kylie Jenner, has been called out after telling an unnamed person to 'go back where you f****** come from' on Snapchat.

The media are outing her as British-Pakistani hahaha

Just came across this. Glad it’s being picked up by non-Asians too, goes to show to those dummies racism against Pakistanis isn’t accepted and people don’t hold the same disgusting views like her
J

I wonder if she’l drop the fyza from the name and just keep sonia because i see they keep editing stuff, like they’ve deleted all trace of shein and their claim to fame with them
L

Love the conservative top she is wearing

she is pathetic, i hope no brands touch her with a barge pole
K

girls, who’s nathan? Is it that guy she was on a date with

Is it just me who feels that she is loving the attention? Of course she will be pissed at everything that’s been leaked but something inside me tells me they are thriving at the amount of likes/views on their nonsense apology video
A

-1/10 for the apology video Pfizer, the only thing your sorry about is finally getting major backlash for your actions and vile words, finally!

.
We aren’t stupid no way you took step back from everything to reflect,soon as those followers dropped back to AliExpress to spend another £15 on 10,000 followers

you’ve had that mind set for so long and it’s been great that you’ve been finally got what’s coming to you! It’s also very hypocritical going on about how Pakistani and Indian communities inbred when your parents are first cousins, this definitely affected use mentally some kind of way.
I would still encourage everyone to send to major influencers/ repost on social media & comment for the algorithm so this stays circulating, mainly the Palestine comments which she’s now denying

, and let’s not forget to keep reporting it to police in Dubai, how hilarious would it be if we actually got them deported, & let’s all go follow henna if don’t already , show them that we support henna and praise her for finally calling out the bullshit things these two idiots say.
L

Also if losing ur mum isn’t an excuse for ur racist behaviour, why do you keep bringing your mum up.. oh yeh to gain sympathy
M

kkwmode said:
girls, who’s nathan? Is it that guy she was on a date with
Click to expand...

Keep it going and hopefully we’ll have good tea from henna that will over shadow her fake apology and the 5 mins of shit she spoke will be long forgotten and just the shit circus surrounding them will shine through, no time to take our eyes of the ball with these two, their snakes and slips in and out at convenient times, the dad and brothers will be desperately trying to expose things that don't concern them. If they wants to be big men, playing the billy big bollocks how about someone steal their pics and share them around the world to see, attached to hatred from these pair, im guessing they wont like it. How sad that they are defending girls who are shameful and twisted who never once acknowledge your existence in life
T

kkwmode said:
girls, who’s nathan? Is it that guy she was on a date with
Click to expand...

He’s owner of “NS media” they’re signed to his agency. He’s the one who was also RUDE and dismissive of the entire rant, when he was asked about it by a fellow Tattler.
A

Guys she should not be able to get away with it. Everyone someone is racist they think they can apologise, lay low for a bit and then come back to light like nothing ever happened. She is not a toddler. She is an almost 30 year old woman. She has been racist all her life and now suddenly after the DM and the Sun news articles and the brands speaking against racism, she has had an epiphany

she has plenty of time to reflect after the voice note and her initial thoughts were “I said what I said”, never for a second she admitted to being wrong or racist. Just stop Faeza

You know truthfully, I’m trying to stay very patient because I have tons of info and a lot and I mean A LOT of pictures that were sent to me of both sisters that I’m pretty sure they didn’t even know of, that they really would hateeee if they got leaked and they’re pushing my buttons and I’m so tempted
M

I’ve just joined tattle and caught up with the entire #7 post, and I have to applaud everyone for all their work I don’t think that girl has ever apologised for anything she’s ever said! Also thank you hanna for speaking up x