Moderator
Loughlin and husband allegedly agreed to pay bribes of $500,000 in exchange for having their two daughters designated as recruits to USC crew

I feel for the kids who weren’t aware their parents thought they were so useless they paid someone to get them into university. That must sting.

Olivia knew what was up tho. I watched like two of her vlogs and couldn’t stand the entitlement. What a sad life.

Fascinating story, just when I was getting into the Jussie Smolett stuff.

I wonder what impact it will have on all of these families. I hate that deserving kids missed out because of this.
M 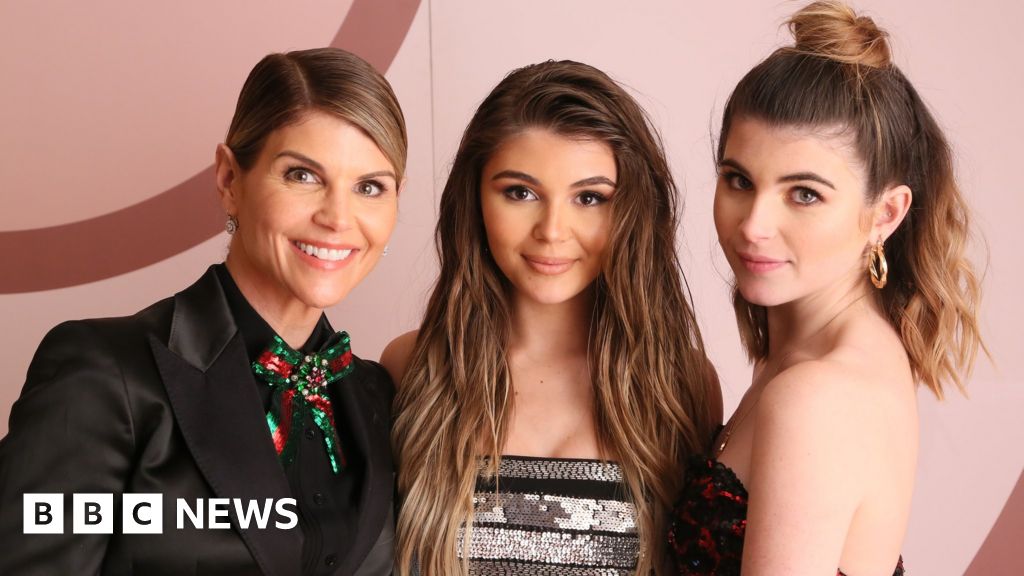 Lori Loughlin's daughters are not charged, but what will happen to their college places is unclear.
www.bbc.com

HuffPost is now a part of Verizon Media

So this isn't that surprising as I think rich people have been donating to/buying their kids ways into colleges/universities for years, but I found the Olivia Jade case particularly frustrating. She's apparently been tweeting about how much she hates school and only wants to go for the parties/game days for ages...plus she rarely went to high school and was often doing Youtube stuff to avoid attending college. It must be frustrating to people who actually worked hard to get in, or worked hard but didn't quite make the cut.

Moderator
It’s the fact Olivia has half arsed the year she’s been there. She shot herself in the foot by telling everyone she was really only there for the party lifestyle and then when she was called out by 90% of her subs she desperately tried to back track, her content had got so unbelievably bad at that point and even her fans were telling her it was obvious she only uploaded when it was a Spon.

Now that’s understandable if she was busy in university and finding the youtube “grind” too difficult.
But she wasn’t even bothered with university!

I do want to find out what Bella is doing and how well she’s doing, she’s in Olivia’s vlogs quite a bit but I bet a good few of them are being put on private today.
Her Instagram has blocked off the comments option.

She deserves all the backlash. California has really great universities and it's a shame that she took someone else's seat through nepotism and bribery. Even if I gave her a benefit of the doubt and she didn't know (which I highly doubt), the way she's handling this whole thing... I have no sympathy. And you know there isn't going to be any proof of her crew practices and meets on her sm.

Her parents did her a world of favors didn't they? By having done this they're pretty much saying well you're both stupid and talentless so we have to go above and beyond to pull strings to get you into a great state university. Just because you're rich and famous doesn't excuse criminal behavior. End of. The nepotistic kids are going to do fine in life regardless due to their parents connections and money so I'm all for these people getting exposed.

She looks a lot older than I expected. I wish all these teens would lay off on the fillers. They absolutely don't need it.
Last edited: Mar 13, 2019
G

I am so happy that these type of scandals are finally coming out!
It is infuriating people who actually work hard and dedicate themselves to getting into a top university only to have that took away from them because some celebrity bought their daughter in. It’s disgusting. Olivia Jade doesn’t have 2 brain cells to rub together. A spoiled dumb bleep.
SO happy these assholes are getting what they deserve.

Jane Buckingham's children have had an interesting response to it all... They're clearly unhappy with their mum's choice...

Moderator
Maybe this thread and Olivia Jades should be linked rather than setting up a second? I should have made it more clear in the title what it was about sorry

There are already some replies on here.

ChrissyPoo said:
Jane Buckingham's children have had an interesting response to it all... They're clearly unhappy with their mum's choice...
Click to expand... 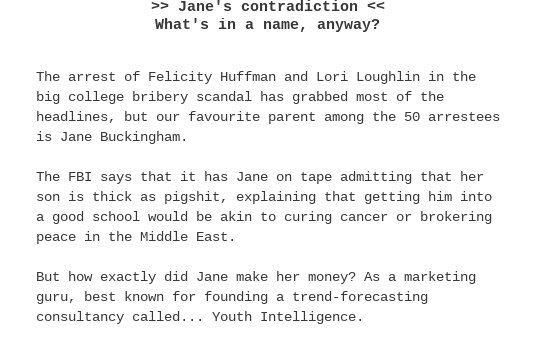 Sunny Hostin from the view made a comment that I love where she said 'how mediocre must you be if you have to game a system which disproportionately advantages you anyway.'

I mean with all the money they have and their children having the best education, they couldn't buy a tutor and have their children work hard to earn their place.

Ive found it all very interesting and I can enjoy this scandal as nobody has been abused (well except the system) I think olivia jades general bad attitude to learning makes it all even worse. How many people who deserve to go to these ivy league schools have missed out so she could party.
Last edited: Mar 17, 2019
G

The justice of the world is finally taking place, these kind of people and such activities need to be exposed. A rigged and awful system.
I have no sympathy for them. Shows how lazy you can be but if you have money the world is yours, that’s wrong. Justice should be served! It is about time!
Y

I wouldn’t say this is a scandal. I thought it was obvious rich people bought their way into stuff.
The whole who you know not what you know type vibe.

Look how many thick Essex boys walk into jobs in the city as traders on huge wages.
D

I think the reason people are calling it a scandal is because they have broken the law. They have forged and doctored documents and cheated on exams all so they can say their thick children went to a good uni. Now they face going to jail it doesn't seem worth it

Funniest thing is Felicity paid the same amount of bribe when playing Lynette Scavo in Desperate housewife’s to have her son in a private school, how funny is that???

Is anyone still following?

Looks like Felicity accepted a plea deal and the likelihood is she will have to do jail time but probably around 4 months. Lori on the other hand refused a plea deal, and despite being warned of this the prosecutors have now placed additional charges of money laundering on top of the mail fraud charges. She was looking at a longer prison sentence anyway, due to paying larger amounts of money, but with the money laundering charge she is now looking at a minimum 4 year sentence, up from 2 years.

I wonder what she’s been doing for the last 9 months,
busy with that crew team.

And she’s appearing on red table talk to discuss the uni scandal. This girl has no shame
K

I watched the Red Table, no idea who Olivia was but it was very interesting to watch from all sides. I thought one of the hosts who was angry that she was there because she was white was blinded by race because of the issues going on in the US right now to realise this wasn’t necessarily a race issue but also a financially privileged issue.

I could see why Jada was empathetic because in reality, Jaden and Willow are no different to Olivia - the both would of gotten things and had the privilege to have a much better life than the average person.

Moderator
Did she explain why she posed for the photos