James seems to get himself involved in every SINGLE drama he can on YouTube or social media lately.
I can’t stand the guy.

This was interesting.
And his biting response was typical James, but the comments have weight behind them. If it was a guy/girl situation it would be a very different response on line.
That’s not even starting on his pallet drama. And his Marlena Stell drama,
And..... etc etc etc

I’d never even heard of him until a thread in Mumsnet about a 9yr old wanting his palette.

Then today my 12yr old has asked for one of his hoodies.

I only learned about this guy recently by other gurus purchasing his palette, he’s annoying. So is he trying to be the new Jeffree Starr or something? Saw his collab with Jeffree smashing up make up didn’t know whether to laugh or cry ?‍

Moderator
He's been problematic ever since he started. Never watched any of his videos but he pops up in others so often. Laughing at his own jokes and lame puns.

His morphe pallet is the number 1 at the moment. It's big with loads of shades for $40 but it's not going to be quality.

I've not really heard of him until recently so don't know the ins and outs of the drama. However, on a superficial level I think that he has one of the most annoying voices I've ever heard! He seems to sister swallow all his words which makes him hard to understand, and speaks way too fast.

I don’t get what’s so special about his palette can get identical ones by brand leaders like urban Decay. People seem to have gone mad for it. It’s because he has teeny bopper followers using their pocket money buying his shit, bit like Saffy B and her super amazing palettes and whatever trash she has out there! They build up such hype for mundane items.

Moderator
James O'brian on LBC is talking about him now, will be interesting hearing what the LBC daytime audience think of youtubers.

His pallet is the most popular at the moment, 8k people isn't that unexpected.

The merch is so basic, just a standard font 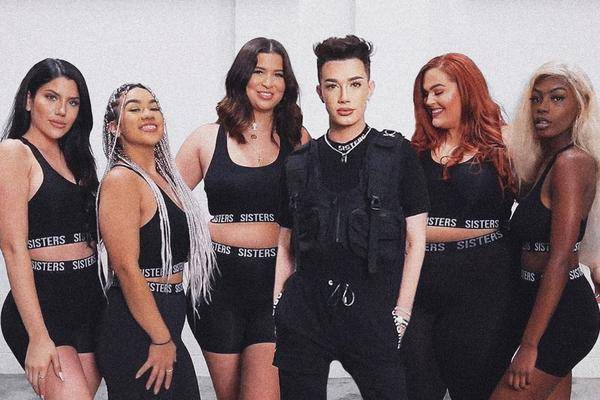 Moderator
He's phoned in LBC! On the way to Heathrow in the taxi and heard the conversation

He didn't really say much and was a bit lost at times, but he got his own plugs in and James was so unaware of him he had no interesting questions.
Last edited: Jan 28, 2019

Yel said:
He's been problematic ever since he started. Never watched any of his videos but he pops up in others so often. Laughing at his own jokes and lame puns.

His morphe pallet is the number 1 at the moment. It's big with loads of shades for $40 but it's not going to be quality.
Click to expand...

The pallete is pretty much the same as the Morphe 35B, which is around £24ish? I’m happy that it’s still £39 for 39 colours here in the UK (the states it’s $39) but you are paying for the packaging; compared to the 35B it feels better quality. The eyeshadows are so pigmented that they actually stain your skin, esp if you’re very pale. It’s totally aimed at his market demographic however... like a good starter palette for your young relative who is just getting into bright coloured, high end make up. It’s more affordable than urban decay or MAC. I got the 35B for Christmas from my husband as I lost most of my eyeshadows over the years, and he admitted he tried to get the JC pallete. Bless.

James exhausts me. There’s no doubt he works hard, but his videos leave me wanting to lie down in a dark room for a while afterwards. He talks exceptionally fast and sometimes I’m not sure what he is even trying to say. One of his better videos is his fountain matching, it’s done really well. I prefer to watch Jeffree Star over him, and that’s saying something.

Emma Chamberlain confuses me, but I’m 33 so it’s to be expected. I watched a video about her getting her nose piercing and then blocked her on YouTube.

My friends daughter is into the Dolan twins. I have no other opinion on them other than “they are pretty”.

Dontspillthemilk said:
The pallete is pretty much the same as the Morphe 35B, which is around £24ish? I’m happy that it’s still £39 for 39 colours here in the UK (the states it’s $39) but you are paying for the packaging; compared to the 35B it feels better quality.
Click to expand...

That's interesting thanks, I'm never sure to beleive lots of the fans saying how high quality it is. I do think lots of them just want to beleive it's far better quality because of the packaging and price. When in fact it could be pretty similar to a makeup revolution one that's a fraction of the price.

It's perfectly marketed though, no suprise it's sold so well.

I brought my almost 13yr old a hoodie and it’s not arrived yet. Not impressed as I messaged him and the website and no reply.
I knew it would take a while as assuming it comes from the US but nothing since taking the money from my card. Almost everyday my daughter asks if her hoodie has arrived. Tempted to buy a rip off one off eBay so at least she has one.

Yel said:
That's interesting thanks, I'm never sure to beleive lots of the fans saying how high quality it is. I do think lots of them just want to beleive it's far better quality because of the packaging and price. When in fact it could be pretty similar to a makeup revolution one that's a fraction of the price.

It's perfectly marketed though, no suprise it's sold so well.
Click to expand...

I’m a bit of an eyeshadow snob and the JC palette is quite nice, but save yourself a £10 and get a 35B IMO. His brush set is £135 which is ludicrous?!

What you all saying about the 500 pound meet and greet tickets then? Ermahgerd.

I'm 30 but love makeup and always have and have been watching all the makeup influencers for some time. At first I liked James I found him really sweet and hard working. Now I'm just shocked at how much he rates himself! The fact he sailed Tati down the river with the vitamins, and now the tickets. It a disgusting. He's changed. Or his mask has slipped. But I'm not a fan any more, at all. I also think things are very strained between him and J☆ lately too. Very little interaction on social media. James.hasnt reviewed the blue blood palette, released his latest merch the same day as jefree released his weed merch, and has done a colab with that Dragun woman. He's one shady shady witch.

I’m honestly past seeing this guy all over social media for his shitty attitude and stupid ass comments, it’s every single week now. He’s awful to his “fans” and claps back at them for the smallest of criticism.
I don’t think there’s a guru or influencer he hasn’t had an issue with or a run in with.
Yet he doesn’t learn!!!!
“I’m only 19, I’m young, I’m learning” is his go to excuse for everything now.
He’s basically the male Tana Monatagueeeee... I can’t spell that

I’m so over him and ALMOST 600 quid!!!!!
With a MASSIVE booking fee slapped on top of that.
Is he Beyoncé now

Yes! His attitude stinks now. I think the fact he promoted Tatis rival company is just dreadful. He seems to have lost all sense of morality. Like I said I think a lot has been going behind the scenes with him and Jefree! They used to always tweet each other, now it seems there is nothing. And its rattled my brain that he didn't review blue blood. That's what a friend with such a big platform would do. Like when they colabed with his palette and Js alien palette. He's really had a lot of stick on Twitter the last 24 hours, and I must say its all deserved.
S

I would like to never see his arse ever again.

STJ_95 said:
I would like to never see his arse ever again.

Those coachella looks were really something.

JC is just exhausting. He needs to take a break and a rest from social media for a month or so, as he’s always causing some drama. If it’s not the giveaway where you have to already have bought Sisters merchandise to enter (sorry poor fans, you suck!) or this obscene £500 meet and greet, he’s pissing off one of the most loyal and polite beauty gurus on YT. Also his lack of promotion for the blue blood palette is deafening, however did J* promote JC’s palette? I can’t recall off the top of my head.

People over on Reddit are justifying the £500 cost by saying they have paid £200 to see a band perform etc. IMO it’s the not the same in the slightest.

It’s like meeting Beyoncé or Taylor Swift though innit

Is it confirmed that's what she was crying about?

I can't feel too sorry for Tati, those vitamins are £32 a month and no way to ever really know if they work or just a placebo. How much fruit and veg could someone buy with that? Instead of thinking a magic pill will fix them. I bet she's made millions and they cost pennies to make.