Thanks to @Marj24 for thread suggestion. Inspired by a weary Mumsnetter who had the misfortune to watch Daily Kitchen Live.

. Your Vienneta glory will not be forgotten soon.
And Jack chose to celebrate it too. She hosted a huuugge meal (for ten) and served lemons in various revolting forms. It sounded marvellous. She got chairs out of her garage and then nuzzled and tickled random people.

Jack revealed she has been in more than 60 talks for TV cookery shows. But she is just too maverick for them all. So in a bold move she plumped for that other tax dodger renegade Lorraine.
She looks back on Daily Kitchen Live fondly. Ah so do we Jack. So do we.

Thanks to everyone who liked my title suggestion, cheap and cheerless, sums JM up, both herself and her revolting "recipes". Also thanks to the weary Mumsnetter, your inciteful remark now lives on!
S

“Look, if you squigs don’t ask about OH soon I will film us having live sex and post it on the hellsite!”

Nuzzle involves a nose, muzzle or snout. Scratch the tummy?...nuzzle somewhere else? Mr Soapy D and I do botty kisses (butt to butt, with clothes on you animals!) but I’ve never nuzzled a tum while making dinner.
S

Apart from loads of great food programs, the BBC food website is an absolute treasure trove of great, time-tested recipes.
I just felt like sticking up for them because they don’t deserve Jack’s bad-mouthing.

Oh no!
Our hats!
They’ve melted!

just realised that this is only funny if you know the broken table sound on TikTok. I wonder how many hilarious TikToks Jack has done with SB since he taught her how to it works 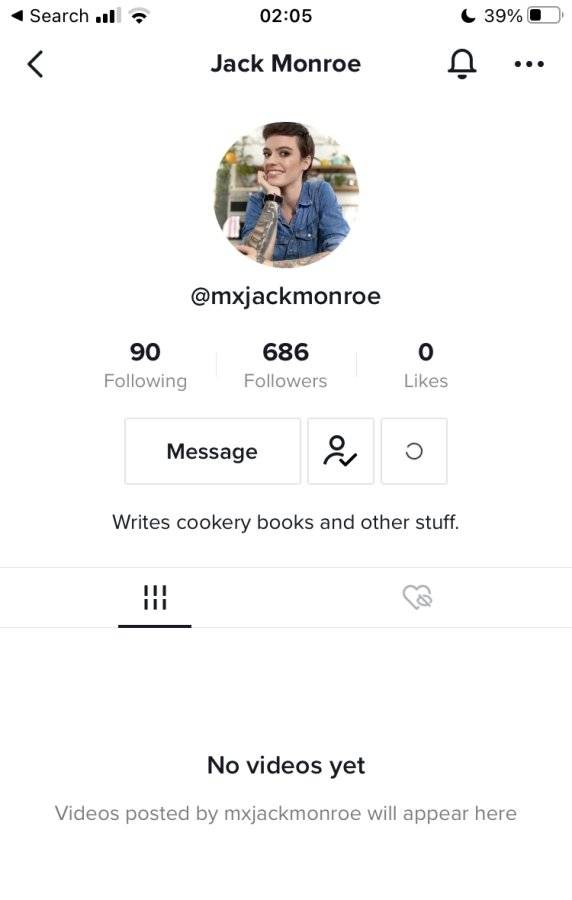 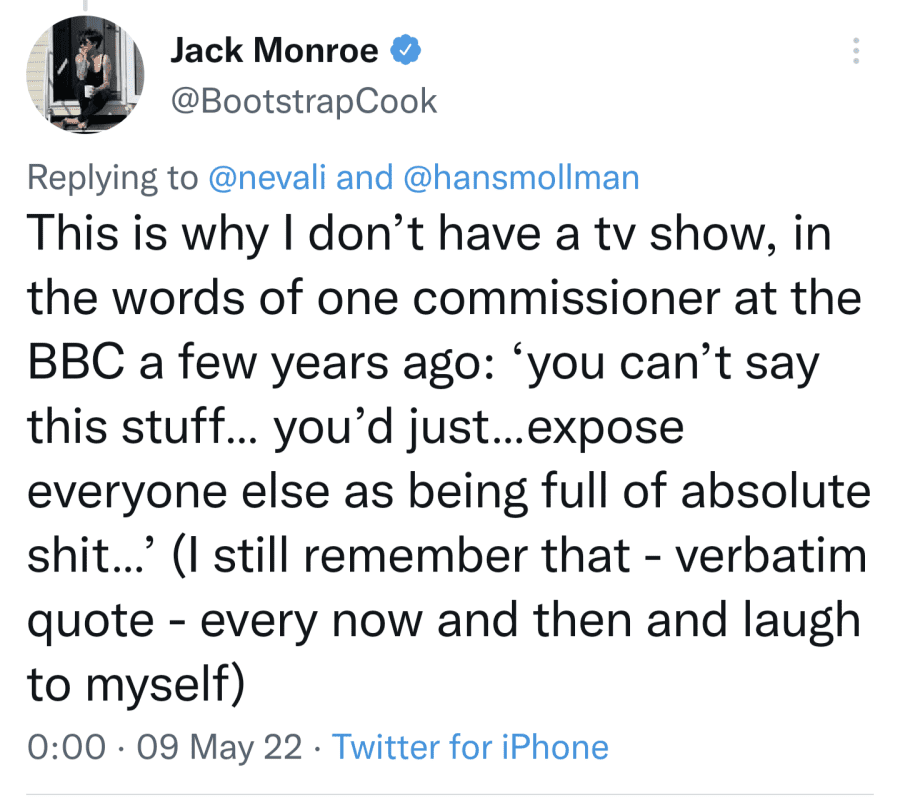 Bringing this forward from the last thread because I'd hate for anyone to miss it.

Knit one Pearl one

These, look rather like, these. Or should I go to Specsavers?

This is all for Louisa’s benefit isn’t it? Look how happy I am. Seriously. Can she just not put a sock in it? Like she’s dating. We get it.

Steph’s packed lunch has so far been a JO free zone despite being on C4 . He doesn’t pop up much on Sunday Brunch either. I wonder why Jack hasn’t been invited on either . On a completely unrelated subject, I wonder if Jack watched the BAFTAs while doing the washing up 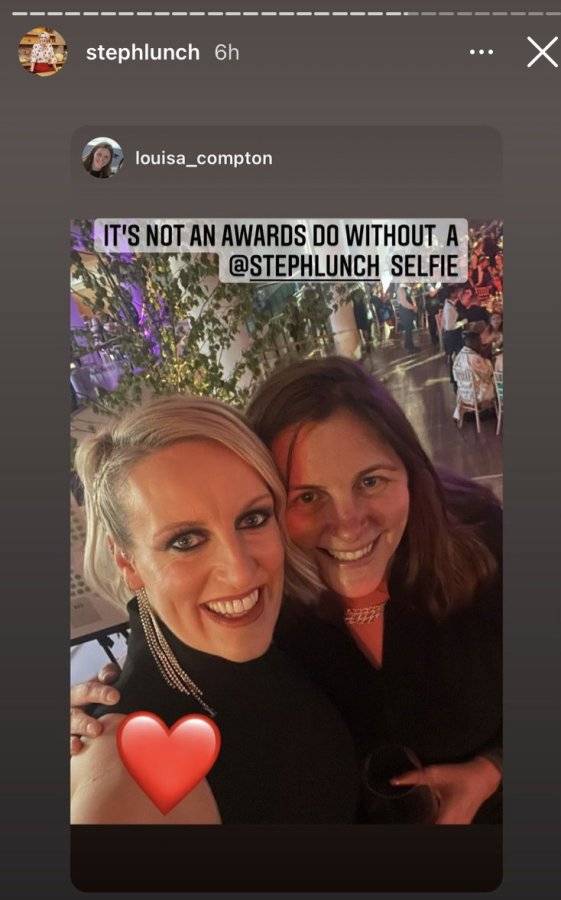 Knit one Pearl one

I thought she always donated the meals from recipe testing/shooting to a worthy cause? (Against every hygiene regulation going but she said it so 🤷‍♀️).
tattle.life

[Anna Hendrick's] [n]arrator voice: This is not true. Actually, it's a lie. Two lies, to be exact

Soapy Dolphin said:
“Look, if you squigs don’t ask about OH soon I will film us having live sex and post it on the hellsite!”

Nuzzle involves a nose, muzzle or snout. Scratch the tummy?...nuzzle somewhere else? Mr Soapy D and I do botty kisses (butt to butt, with clothes on you animals!) but I’ve never nuzzled a tum while making dinner.
Click to expand...

Please, I beg you not to give her ideas. She already threatens to release her nudes, and brags about her tits and (I hate that I have to write this) 'her excellent vagina'

She’s too coarse for the BBC so they put her on their flagship daytime show in the middle of the pandemic…okay.
Hey Miss Munroe we can’t have you on the BBC, except those 2 weeks you were. Oh and everyone else who appeared on the programme we will invite back.

also everyone took doggy bags home (has anyone ever done that from someone’s house) so she cooked pork for 20 then? So very very poor isn’t she.

It’s okay, I know the answer. 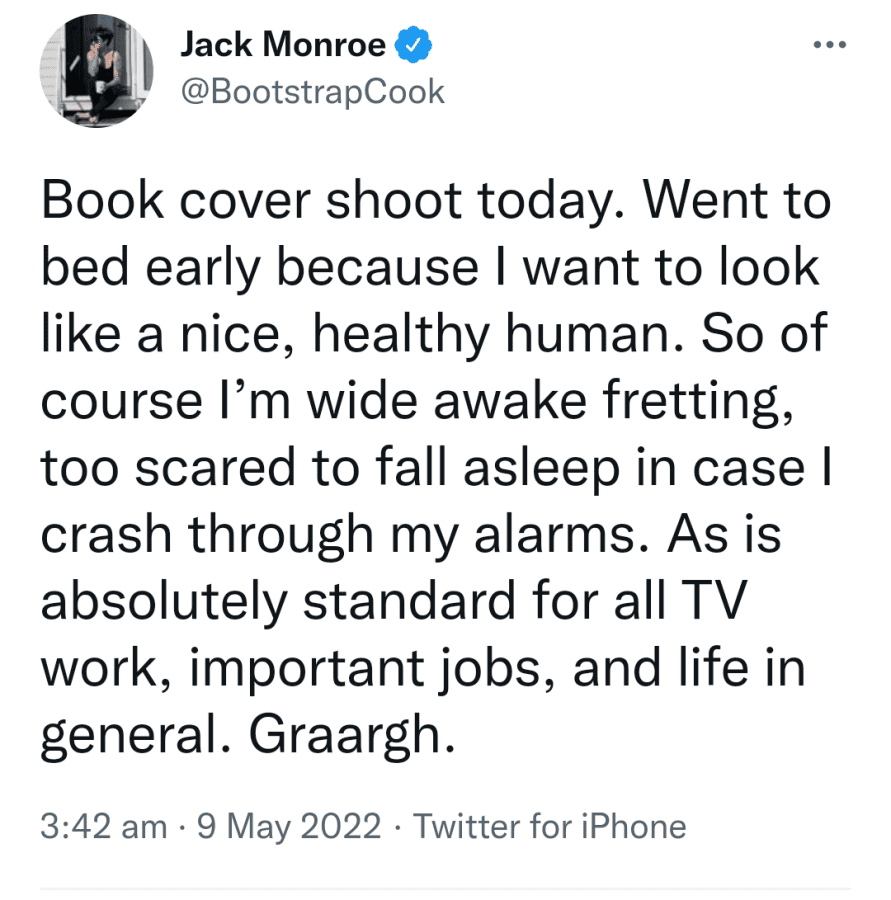 But surely she has alarms anyway for the school run she says she does with SB? An early start during the week shouldn't be unusual.
And will she be wearing the Not Tiffany Tiffany earrings for the book?

Bollocks. She’s still up titting about on Twitter, and is now angry with herself after losing track of time and realising she’s only got a couple of hours left to sleep.

She really is insufferable. 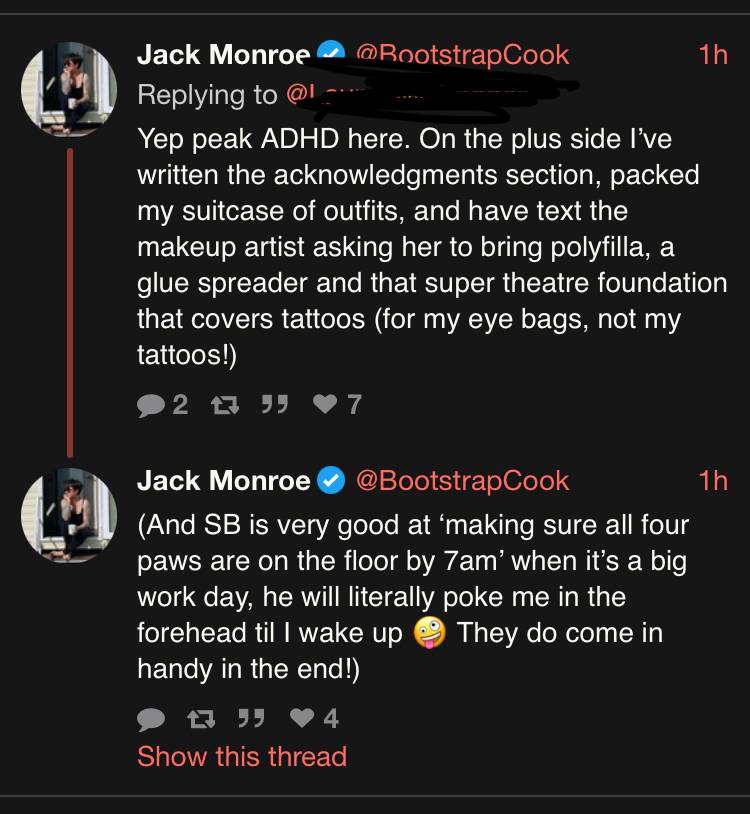 In response to a squig talking about tasting boards costing lots of money and how they should include drugs for that price. 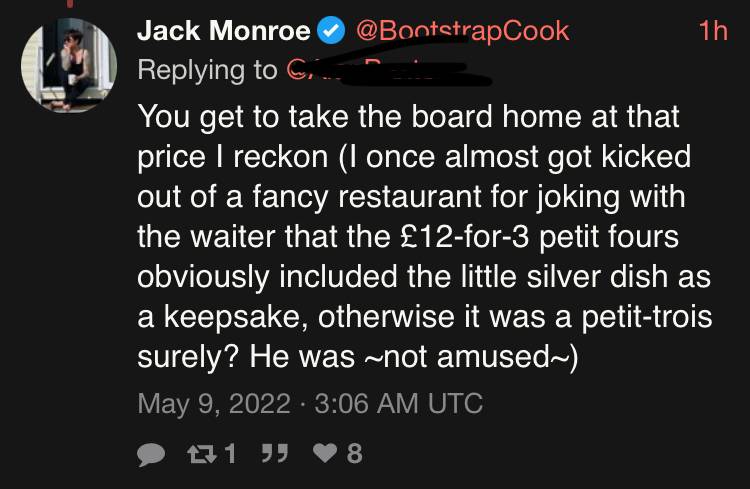 Angry face because she thinks it’s cute to joke about “SB” parenting her.

Not that it’s true, he’s not there and she’s fantasising. Most mums missing their children would dream about spending quality time together, whereas Jack fantasises about parentification.

@Mel Donte re your question at the end of the last thread - I’ve never been to an AA meeting where hugging is mandatory. There are huggers in most groups I would imagine but they’re not waiting at the door, refusing entry to those who’d rather punch themselves in the face than be hugged.

It’s just another example of Jack dropping in that she’s in AA.

Into_the_tunnel said:
She really is insufferable.

In response to a squig talking about tasting boards costing lots of money and how they should include drugs for that price.

Sorry to quote myself but isn’t the acknowledgements section the easiest bit to write?

It was the shortest section for the things I was able to produce when my mind wasn’t in the state is in now and in the cookery/non cookery books I that I have, they are a few lines long.

What is she talking about?

ETA- scrap that. She works 100 hour weeks doing fuck all. Her hours must be our minutes. So therefore an acknowledgment section which would take us 5 minutes to write would take her 5 hours. Sorted.