Fathering Autism #11 S.O.S. we need vlog content, gotta make back all the money we spent

Actually it’s not the same and wow calling someone a jerk for having a valid opinion. These are the fans of the Maasss.

You guys are gonna love this, a reply to Pigcilla begging for subscribers:

Their latest video, it shows how unaware Assa is about EVERYTHING going on in the world. Because he really shouldn't have posted that video. Prime rib for dinner, you seriously showed that? When everyone is having a hard time finding proper food because of this. And the lounging beside the pool every day and having drinks? You're trash. Nothing but classless trash. I have family members who are considered essential workers, one putting their life on the line and we're also over here about to probably not have money and could mean bye-bye essential medicine. But no, you guys "are a struggling" Just screw this man and his disgusting narcissistic ass. I'm so angry I feel like I could get sick.

You have doctors and nurses out there having to make decisions they never thought they would be having to make, working none stop with zero to little sleep, putting their lives in danger and having zero equipment to properly protect themselves. But no, you guys "work hard". Go ahead and drink your pina colada and stuff your trashcan face you ass of a man. And because I'm so angry and petty right now, and over your narcissism, you're getting a B-cup Assa.
Last edited: Mar 29, 2020
A

KeepinItReal516 said:
Sorry not sorry, but all their fans are revealing themselves to be trailer trash people too. That was an idiotic statement to make to defend these people. Yes any logical person with a mind that is not ******** would know that she is brining back germs and shit. I mean ... these type of people are the absolute problem right now.
Click to expand...

Ugh not to be nit picky but that term “trailer trash” is extremely derogatory. Many, Many people live in trailers because it’s all they can afford and a multitude of other reasons.....of those people most of them are extremely proud and their homes are spotless. While some don’t have much past a high school education, that can be said for all kinds of people. I totally understand what you mean by it but as someone who at the time was a single momma and living in a trailer(quite proudly because it was the first home I purchased and I did it raising two kids by myself) it still stings to hear that expression. None of my neighbors were trash either, there were quite a few senior citizens who again were proud to HAVE a home because they were living on a very limited budget, newlyweds and other single parents. Our community was always bright, cheery and clean. I know it’s a silly thing but I have read that term so, so many times in the eleven threads that I finally had to speak up.

Live from Quarantine:
What's up, What's up! Take a look at all our mutherfuckin' things. Spend the next thirty minutes looking at my mutherfuckin' face, my man boobs and my Ray-Bans baby!
Focus on the positive people, like eating Captain Crunch. Oh goody goody, hey there bikini clad beastie, how's college. It's kinda hard learning ASL with a deaf professor. Ha ha fucking ha. No, we don't know ASL, we can't be bothered with that sillyness. We only learn Abbie's adaptive demand signs. Speaking of which, here my sweet girl, have a snack, cause you know, you must be hungry, you demanded it using your adaptive demand sign. Good job sweet girl! Oh look, my wife, coming home from grocery shopping in her swimsuit. Wash yo hands, ho! Like typically, I get our groceries delivered but I had to pivot you know what I'm sayin? And what were people doing? It's like, they were shopping on a typical Saturday, I am the only one who should be shopping on a typical Saturday. Oh, and they had limits healthy foods. So, typically I would not buy all this junk food but it's okay for now know what I'm sayin.

Actually it’s not the same and wow calling someone a jerk for having a valid opinion. These are the fans of the Maasss.
Click to expand...

He actually asked them not to send them money but no doubt that was just for show. That request won't last long.
He is such a man baby.
Whining about being sad and his rich people problems.
And how awful it is for

to be at the grocery store.
Woah. Summer's bathing suit is very revealing.
Abbie sits in her "spot" up against the brick wall where she usually has music. But no music today. Of course.
Assa says he's read the bible and in his best mimicking southern accent says "yeah I was gonna be a preacher".
As if that was hilarious.
It would behoove him to read it again.
Right now.
IMO.
Oh...I almost forgot!!
He just volunteered Isaiah's screen name and what game he plays online.
What parent does that shit?
Poor

.
She doesn't think anybody else should be at the grocery store but her.
How dare they limit her to 2 items each!!
Don't they know who she is?
Bitch needs to be thankful she had the money to buy 25 bags of fuking groceries.
What a C word.
IMO.
Last edited: Mar 28, 2020
N

I am literally restraining myself from creating a new acct bc I want to give that leghumper a cyber ass-whoopin'. Summer should not have gone back there. Parents arent supposed to be bringing kids back from college. We arent supposed to be traveling. I am so super annoyed. We have our 1st two cases in our local hospital now. I dont get to isolate in a mcmansion and sit poolside. I still have to go to work. Stupid ass people like Summer and the Maass Squad are jeopardizing everyones health and I am just damn tired of it.
K

"we are going to make the world suck less". .. watch us lounge by our half million dollar pool and eat steaks with Abbie honking and grunting in the background!!!!
L

Someone asked Priscilla again for a weight loss update. Priscilla just keeps ignoring. Her husband made a video about cheating and having another child and she went right along with it, but for some reason she can’t admit that she may have failed a little on her weight loss journey?
L

Good morning all. I have noticed two marks on Ps hand before, anyone know what that is?


In my opinion no one on that family has ever sexually abused Abbie. Asa is a rat but I do not believe he would ever do that, not in the bath or laying with her in bed. It is not unusual for a parents to lay with their child for a bit when they first go to bed. Abbie is still mentally a toddler I do not find it weird or inappropriate. I also feel it is fine for her father to bathe her. She cannot do it by herself and he is her dad. If she bathes, P cannot bend down and help her!!

I feel they should not have allowed Isiah to bathe or dress Abbie. It is inappropriate. He is a young male and although I do not think he would ever harm her, he could get confusing feelings. Just no reason for him to do that.

The tickling needs to stop. Because of her physical size and physical age, that is completely inappropriate. They need to be teaching her gentle touch and boundaries. She knows no boundaries as evidenced by grabbing that lady at the aquarium. Summer deserved to be kicked in the chest, she is way too physical with Abbie, you teach her to be wild....ya might get kicked.

It has become glaringly obvious the Father of all Autism has no clue at all how to raise this girl. If these vlogs do not show these ignorant fans that...then they are far too stupid to be helped.

This relationship they have with Summer is over the top weird. Just bizarre.

Now when Summer and Abbie met that Guilermo kid at the beach? He treated Abbie in a way that made me feel cringy. He called her Queen and then sitting behind her hugging her and wanting to "stay like that". That is the only sorta red flag I have gotten from anyone.
L

It really bothers me how Abbie is overly congratulated in nearly EVERYTHING she does or is constantly being rewarded ALL the freaking time. Abbie could fart and Assa would be like, "Good girl! You're so smart. Yes you are!" And then as for Isaiah, I rarely hear Assa congratulate his son on things, or if he does, it's done in a way where he's for the most part, insulting him or making him a joke.

I got blocked from Prissy's twitter account this morning. I called her out for Dunkin and Popeyes not being essential. I said she wasn't the brightest crayon the box. 52 saw it before it was removed.

Has anyone noticed that Isaiah is getting the same body shape as his father, I'm trying to be diplomatic here

On their new Vlog on Youtube. Mom works too much. And life is hard ya'll when you have to quarantine around your in-ground pool and sip Margaritas.

PS Asa keep your shirt on. No one deserves that.

Omg the blub wobbling on her underarms. I just can't.

But it's off to Dunkins cause Abbie will pitch a fit if there's no destination, and what our Autism princess wants she gets it.

Summer was probably one of the people on the beach during Spring break.
L 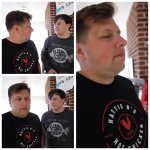 Yeah that beef noodle thing is not stroganaff. Not even close. And that looked like packet gravy to me. Not that there's anything wrong with that. But left over pot roast, mixed with brown packet gravy, and dumped over noodles is NOT stroganaff. P really needs to look at recipes. And like I said not knocking short cuts here and there... but don't claim you are a chef or making things from scratch that you aren't. And educate your damn self already about actual cooking so you don't sound like a dingus constantly.
Top
✖
AdBlock Detected