We were well overdue a new thread! Congrats to @HankMcPrank on the winning title

Talking of which, it’s always worth a reshare at the start of each thread 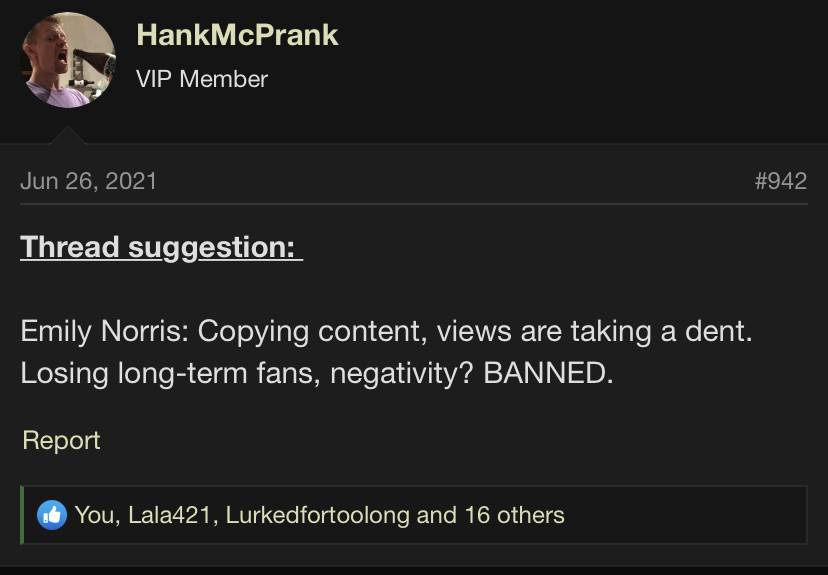 C7645 said:
We were well overdue a new thread! Congrats to @HankMcPrank on the winning title

Talking of which, it’s always worth a reshare at the start of each thread

Didn't she go an air purifying in the old house...never to be seen again

every single thing is an ad.
Say this on every thread, she taught me so much 2 years ago, yes via ads at times but there wasn’t so many.
Recent thing I notice is a holiday packing one from a while back she uses a branded shave gel and razor, saying her go to.
Recently states every holiday she gets a wax!

which is it? As we know she’s vain, I’m going to say she waxes and sells over priced razors to her minions. Couldn’t believe it when I realised

Those FHM pictures are worse every time I see them

Anyone else noticed after her grand vow renewal Emily can’t stop showing off her rings? As if her £1mil house ain’t enough she can’t go a day without flashing her diamonds in stories, thumbnail, vlogs, you name it, the prat’s got to make sure everyone knows how rich she is. She never used to touch her chin or scratch her face or swipe hair back so much in stories but now it’s every fucking day and every shot her left hand just so happened to be in view. No right handed person gestures predominantly with the left hand, it’s so unnatural and some poses so awkward idk is there anything shedoes that isn’t fake? You ain’t the only person who wears diamonds Ems no big deal, the funniest thing is I thought she had a large stone in the centre with halo to appear larger but on today’s stories it’s actually four small stones which costs less than a solitaire. Why haven’t upgraded your diamonds Ems? Not in the budget after the window seat and jack and Jill? Clearly no one has told her the triple band chunky manly look ain’t in fashion.

And Matt won’t even wear his wedding band

. I know in many countries married couples don’t wear wedding rings or take the husband’s surname but for us here it’s still common practice, it’s the least he could do whether £20 or £2000 you’d think he’d wear it if he loved her, it’s just one ring it ain’t asking for much IMO. My BIL also dislikes wearing jewellery he takes it off as it interferes in his line of work but he still puts it back on at home or when out and about. Idk anyone else smell a divorce coming up in future? they don’t even sleep in the same room half the time

Did her Bridesmaids wear black?!

Lauren_2195 said:
Did her Bridesmaids wear black?!
Click to expand...

Yeah, I noticed that!

Outing myself as a complete bitch here but considering the photos are 12 years old she looks quite old on the first one, I thought she had shoved her wedding dress on at first

That photo in front of the Jo Malone perfume balanced on the Jimmy Choo box made me howl, what a knobhead
B

Becky1mm said:
So her sister in law is clearly the one giving her all the terrible Botox

Yes that’s how clearly she was still getting it done through lockdown too!!

Becky1mm said:
So her sister in law is clearly the one giving her all the terrible Botox

She isn’t the best #AD for Botox

That dress is horrid.
S

Does she not own any other shoes? They don’t go with that awful dress

I don’t like the dress, and it looks odd that she’s so dressed up while Matt looks like he’s dressed to do the garden! I would be really annoyed that I had made all that effort for a special dinner while my partner looked scruffy.
K

I actually like the dress but shoes are awful and don't go with the dress.

sharon1975 said:
Does she not own any other shoes? They don’t go with that awful dress
Click to expand...

I think her and Matt don’t suit each other at all. She looks so much older then him and then he dresses like an 18 year old. They just look a bit odd imo lol
L

She really left her kids again hahahaha for someone who claims to have separation anxiety to the extent of having therapy this is a joke!